It must be time to start writing again, so here we go…

Posted by aprilsopczak | Filed under Poetry

I have never liked the idea of wishing single moms a Happy Father’s Day. Now, before anyone throws out the that’s because you don’t know what it’s like card, let me just say that I was a single mom for a while. I didn’t receive child support or every other weekend off. I was it  – the only parent. So, believe me, I totally get it. But, I didn’t do everything I did because I was both mom and dad. Dad was MIA and that caused a whole special set of circumstances that was mine alone to face, and that is exactly why I won’t wish a single mom “Happy Father’s Day.” She isn’t two people; she is one very tired, worried, overworked, overstressed, and overwhelmed individual who just keeps going because she is mom. She deserves to be honored for who she is and that is one heck of a mother.

So, this Mother’s Day, I wrote this poem to honor my dear friend, Melissa, who is a single mom to three beautiful, young children, and I’d like to dedicate it to all hardworking single moms. I will never condescend to you and pretend like you are capable of being two people in one. I know tired is no longer a feeling, but a way of life for you. I see you push through and keep going when not even you think it’s possible. You amaze me. Happy Mother’s Day!

This is just a small moment from my day today. Anything can be a story.

I saw him out of the corner of my eye as I approached the roundabout. I watched as his big foot took one step off the curb and into the crosswalk, followed by another big foot lumbering up to a giant torso and shoulders that hunched under the weight of his bulbous head. He was big, for sure, but not in an imposing way. It seemed as though he had been born big and his body just kept on growing because it didn’t know what else to do. He turned his giant head to look at me and pressed his mouth into the wide, tight-lipped grimace of an old toad. His eyes glared into me with a look that said, “I’m crossing this road and you had better wait.” I had no plans to do otherwise, but decided to play along anyway. I glared back with a look of inconvenience I did not feel and feigned my impatience. My efforts were rewarded with a look of smug triumph as he faced his enormous body forward and lurched his way across the walk. He looked quite pleased with himself, and when he could no longer see me, I giggled with delight. Two days made by one momentary glance – the strangeness of strangers.

Posted by aprilsopczak | Filed under Poetry

Here’s a fun little poem I wrote to amuse my kid!

It wasn’t my fault

Mrs. Wong
Went on and on
The stupid clock
Wouldn’t tock
The class was everlasting

I know it’s wrong
When poor Mrs. Wong
Found snot all over her shoe
I LOL’ed! What would you do?
But now I am in trouble

Please, Principal
Be my pal
And just forgive
The wrong I did
I’m sure that you are seeing

It just wasn’t my fault

Mistaking one for the other is simply unbearable!

To “Josh” in the home improvement store,

Hello, and welcome to my blog! This is not a political blog and I do not normally write about political things. It’s not that I don’t think about political things, but this is a blog about writing and other creative outlets. However, your politics crossed over into my realm today. You see, when you blamed the two ISIS shooters who attempted to assassinate political cartoonists on the actions of the cartoonists, you suggested that there should be limits to free speech and that fear is certainly one of those limits.

Fear is a limiting factor in any artist’s life – fear of rejection, fear of failure, fear of opening his heart out onto the page or canvas for the whole world to see and criticize. These are fears artists must work though, but one fear an artist must never have is a fear of being murdered for her art. The framers of this great country of ours decided first and foremost among a person’s rights is the freedom of expression. I, for one, believe they got it right. If a person is afraid to express himself, he isn’t fully present in his own life. If a person cannot openly express her opinions and beliefs, she is not fully present in society.

You mentioned that the cartoonists were merely “poking the belly of the beast” as your primary condemnation of their actions. When I said that the only difference between Mohammed cartoons and the “Piss Cross” was that no artist was afraid that Catholics would go shooting them up for open criticism, you came back with “unless they happened to be an abortion clinic doctor.” I just walked away at that point because I was trying to buy a refrigerator, not have political discussion, and I didn’t feel as though your place of business was the best place to do this. My blog, on the other hand, is a great place for it and here I will follow you down that particular little rabbit trail.

Let’s say some pro-abortionists were planning a pro-abortion rally in Garland, Texas, right where the cartoon contest was held. And let’s same some anti-abortionists came and tried to shoot up the event. Would you then say, “Well you know how rabid those anti-abortionists can be. Why would they have a rally to support abortion? Why would they poke the belly of that beast?” Somehow I doubt it. I’m going to guess that you would throw something out there about abortion being legal and constitutionally protected. You know, kind of like, no just like artistic expression is. (Actually, free expression is mentioned by name and abortion is not.) Hmmm….

If you say that an artist should not draw Mohammed because it is rude, that’s an opinion I will probably agree with. However, when you say that a person should not draw Mohammed because she is “poking at the belly of the beast,” you are saying that it is okay to murder someone because she insults your religion, politics, or even just your feelings. That is about as counter to American ideals as you can possibly get. I’m not really sure what you are learning in those political science classes you said you are taking, but it is not the true meaning of the First Amendment. You see, I think the “Piss Cross” is disgusting, I think drawing Mohammed is disrespectful, and I think all art disrespecting any religion is not necessary or polite. But that’s me, and so I don’t do it. However, I will defend anyone’s right to do so. While an artist is up for critique, even scathing critique and open scorn, an artist should NEVER be afraid that his art will result in death.

Just a small poem from somewhere within… 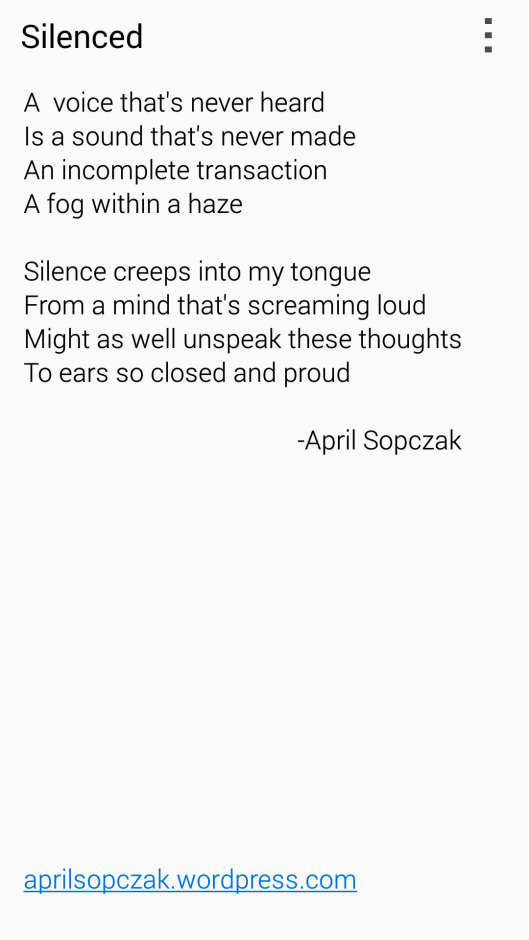